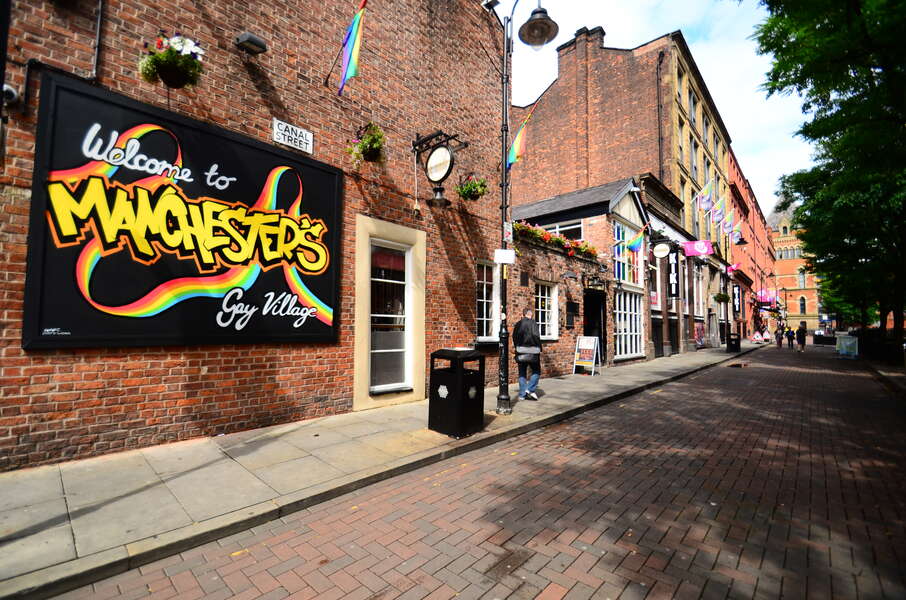 Cottonopolis, Warehouse City, Rainy City, Madchester—no matter what you call it, the United Kingdom’s Capital of the North is one of Europe’s most exciting hidden gems. And that goes double for LGBTQ+ travelers in the know, who flock to Manchester’s picturesque brick-lined streets thanks to its inviting atmosphere, plethora of queer-friendly bars and restaurants, and longstanding reputation as a beacon for social change.

While the entire city is overwhelmingly welcoming to visitors of any background, the Gay Village, located just south of Chinatown, is the hub for Manchester’s sizable LGBTQ+ community. It’s a modest district, marked by an intersecting stretch of Rochdale Canal that’s flanked by walking paths and arching footbridges—once a hotspot for cruising, these shadowy nooks and crannies served as the catalyst for the area’s cultural formation. Today, however, the canal is less a place of clandestine rendezvous and more a proud beacon of local LGBTQ+ life, often decorated with rainbow flags that mirror the businesses surrounding it.

The Gay Village is also home to a host of raucous LGBTQ+ events, including Sparkle, a trans-focused celebration held each July; spring’s cheekily titled Great British Bear Bash; and a yearly Pride blowout that attracts hundreds of thousands of revelers from all corners of the globe. Manchester served as the backdrop to the original Queer as Folk a full 17 years before openly gay candidate Carl Austin-Behan was elected Lord Mayor. To say Manchester is a queer city would be an understatement akin to saying Beyonce is a decent singer. But how did this hardworking, industrial northern enclave develop into its current fabulous self? It all began with a good, old-fashioned drag show.

How an illicit “fancy dress” ball started it all

On September 24, 1880 at around 9:30 pm, some 50 people gathered inside the Temperance Hall off York Street in the city’s Hulme neighborhood. The hall was officially hired out by an entity calling itself the Pawn Brokers’ Assistants’ Association, but those in attendance knew they weren’t exactly showing up for a merchant’s networking event. Instead, they were gearing up for a “fancy dress” ball—or, as we now know it, a drag show.

Of course, crossdressing wasn’t just frowned upon in Victorian-era England, it was illegal, triggering punishments ranging from hard labor to jail time or worse. In preparation for that evening, the organizers had covered the hall’s main windows with cloth and maintained a strict guestlist as to protect the partiers. Nevertheless, Manchester’s Chief Constable, working off an anonymous tip, dispatched Detective-Sergeant Jerome Caminada and a pair of uniformed police officers to check out what he was told would be an event “of an immoral character.” Once there, the coppers managed to peer through an unguarded window and were shocked by what they saw.

The History of the McRib

About half of the crowd inside were dressed as women, some as famous historical figures like Anne Boleyn and Shakespear’s Juliet. According to the record, they were kicking up their heels in Scotch Reels and can-can-style dances, shouting and laughing in high-pitched voices, and answering to womens’ names. A few invitees had paired off and were canoodling in an adjacent room. The officers immediately raided the joint, arresting 47 people on charges including soliciting and intent to commit “improper actions.”

The scandalous raid immediately made headlines all over Europe. And while the drag show’s attendees were undoubtedly terribly marred from the experience, the event also shined a light on Manchester’s thriving underground gay scene, drawing even more LGBTQ+ people to the city. Fast-forward to World War II, and drag shows were a regular occurrence at the still-standing Union Pub. The performances were geared toward entertaining US soldiers stationed nearby, but also worked to normalize, employ, and shelter the local queer community. By the late 1950s and early 1960s, just a few years after acclaimed Mancunian mathematician Alan Turing famously pled guilty to homosexual acts, the canalfront pub’s growing clientelle had gradually claimed the neighborhood as their own.

Elsewhere, Mancheter’s LGBTQ+ population was slowly emerging from the darkness of nightlife and beginning to organize. The year 1964 saw the rise of the North West Homosexual Law Reform Committee (later renamed the Campaign for Homosexual Equality, or CHE), an activist group that eventually brought down the criminalization of homosexuality. In 1975, a group of gay men got together and set up the Manchester Lesbian & Gay Switchboard Services (MLGSS), a council grant-funded telephone helpline for queer and questioning Mancunians. And in 1985, another grant, this one for a relatively substantial £1,700, gave way to the first-ever Manchester Pride, complete with a massive downtown banner.

By the 1990s, the snowball effect was in full swing. Antidiscrimination laws and protective bills were passed, new advocacy groups formed, and additional community resources were established, providing assistance to unhoused LGBTQ+ Mancunians as well as those affected by the ongoing AIDS epidemic. Queer bars threw open their doors, no longer fearing harassment or police raids, and the area’s clubs, restaurants, and shops multiplied like rainbow-hued rabbits. LGBTQ+-inclusive rugby and football (AKA soccer) teams took to the pitches and, in 1999, the groundbreaking Channel 4 TV drama Queer as Folk set up shop right on Canal Street. Six years later, the city council laid down permanent rainbow plaques along a historic urban route designated the LGBT Heritage Trail. It was a veritable LGBTQ+ paradise—if, of course, you don’t mind a little rain.

The Gay Village is an obvious homebase choice for visiting queer folks. Airbnbs are on hand for the self-catering crowd, with private apartments averaging around $125 per night (you’ll quickly learn that Manchester is as wallet-friendly as it is queer-friendly). For a chic and sexy alternative, check out Velvet Hotel, an award-winning lodging smack-dab in the heart of the Gay Village. And history buffs might want to book a night or two at the New Union Guest House, where a fleet of modern rooms perch above the same pub that breathed queer life into the neighborhood nearly a century ago.

But the Gay Village isn’t the only game in town. Aside from the many chain hotels and other accommodations clustered around the City Centre, there’s also the Northern Quarter, a bohemian hideaway rife with third-wave coffee stands, craft cocktail bars, cutting edge streetwear at vintage stores, indie music venues, and plenty of other hipster draws (including the community-minded Gay Pride Shop and Queer Lit booksellers). Post up at a cool Airbnb—this design-forward converted loft provides everything you need without breaking the bank—or snag a room at the boutique Abel Heywood Pub & Boutique Hotel, the four-star Cow Hollow Hotel, or the polished Dakota, with its muted slate color palette and standout lobby bar.

The best part? No matter where you stay, the city’s supremely walkable layout ensures you’re never more than a 15-minute stroll (or speedy cab ride) from wherever you want to go.

In a city with this much queer excellence, it’s tough to know where to start your explorations. Get your bearings on a Free Manchester Walking Tour, which departs every day at 11 am, rain or shine (alright, mostly rain), from the Alan Turing Memorial in Sackville Gardens. The friendly and chatty guides really know their stuff, and the three-hour journey highlights the best the city has to offer—all you have to do is show up and listen. Private tours focusing expressly on LGBTQ+ history or the Northern Quarter can also be booked ahead of time.

After you’ve surveyed the land, it’s time for some culture. There are dozens of museums to peruse, from the progressive People’s History Museum (which traces Manchester’s rabble-rousing labor, social, and political uprisings through the ages) to the fascinating Manchester Jewish Museum, stocked Manchester Art Gallery, and hands-on Science and Industry Museum. But you’re here for the queer, and for that, you’ll want to set your sights on the one-of-a-kind National Football Museum.

What’s so gay about the world’s most popular sport? According to this interactive, three-floor institution, quite a lot. Read up on displays showcasing pioneering English footballer Justin Fashanu (who came out publicly in 1990), the anti-homophobia Rainbow Laces campaign, and a newly unveiled section devoted to early 20th-century LGBTQ+ rights icon Lily Parr, the first woman inducted into the English Football Hall of Fame and one of the architects of the women’s game. Then take the funicular elevator up to the top floor for Crossing the Line, a freshly installed exhibit dedicated to the history of women’s football in the UK from Parr’s era up to the UEFA Women’s Euro 2022 champion Lionesses, with its many out and proud superstars.

The best LGBTQ+ places to eat, drink, and make merry

Whether or not you decide to step foot out of the Gay Village, rest assured you won’t go hungry—or thirsty—on your next trip to Manchester. Down by the canal, you’ll find a maze of cozy pubs, thumping discos, refined cafes, and late night takeaways all vying for your business. Don’t miss the Richmond Tea Rooms, which, with its campily proper British decorum and Alice in Wonderland theme, serves way more than Earl Grey and crumpets. For something a little heartier, try the Molly House, where a refined bill of tapas shares table space with beer, wine, and good company in a homey, low-key space. Or there’s the similarly laid-back Goose, with its traditional pub fare. Number 1 Canal Street holds court next door, a haven for the theater-bound with upmarket bistro eats and a full bar. Whereas Village Fish & Chip Shop, McTucky’s, Dr. Miao, and Krunchy Fried Chicken have all your post-booze needs covered with a battery of crispy-fried goodness and other quick snacks.

Speaking of booze, Manchester’s queer bars and clubs run the gamut from swank and loungey to dank and divey to sceney and sweaty and everything in between. Starting from the top: check out Tribeca for wine and breezy daytime people-watching; Oscars for an old-school piano bar extravaganza; New York New York and Centre Stage for cabaret-style acts and impromptu dance parties; Bar Pop for an anything goes attitude that spans generations; G-A-Y Manchester, On Bar, and Cruz 101 for raging ‘till dawn; the Church and Via for beers, drag shows, and a trans-inclusive environment; newcomer the Brewers for a little bit of everything; and REM Bar and the Eagle Bar for edgy, masculine-centric vibes.

The fun doesn’t stop once you exit the Gay Village’s vibrant confines. Artsy Northern Quarter joint PLY hosts a beloved Sunday drag brunch, while LGBTQ+ audiophiles can soak up the city’s world-famous live music scene at queer-affirming venues like Depot Mayfield, the White Hotel, the landmark Deaf Institute, and eclectic Aatma. And last but certainly not least, a roving class of queer collectives like What She Said Club, Homoelectric, Bollox, and Kiss Me Again keep Mancunians on their (literal) toes with a never-ending series of queer-centric nightlife bashes at bars, clubs, and theaters around the city.

Meredith Heil is the Editorial Director of Thrillist Travel.